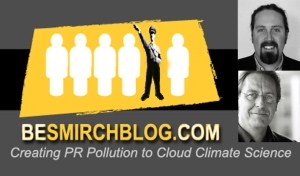 DeSmogblog writers Demelle and Littlemore jump the shark with their article ‘Affidavits in Michael Mann Libel Suit Reveal Astonishing Facts About Tim Ball Associate John O’Sullivan’ (July 26, 2012). The piece claims to have “facts” undermining the integrity of this author.* Upon examination the supposed “facts” prove to be naught but rehashed hearsay claims dismissed last year by an investigation of the Law Society of British Columbia. Disgraced former journalist Andrew Skolnick submitted the affidavits to the very same court where prominent skeptic climate researcher, Dr. Tim Ball is defending a libel suit against Dr. Michael Mann. Professor Mann is Director of the Earth System Science Center at Pennsylvania State University (PSU) and has proved a successful promoter of the lucrative billion-dollar business of global climate alarmism. Skolnick’s affidavits add not one iota of actual evidence dispositive of accusations that Mann perpetrated a fraud.

The piece from the David Suzuki-backed attack dogs is easily exposed as a bait and switch ploy. It’s purpose: to distract attention from the real issue of the failing Vancouver lawsuit of the alleged Climategate fraudster whose history is being indelibly entwined with that of convicted pedophile, Jerry Sandusky. Both men were the subjects of internal investigations by their PSU employers that critics say were “whitewashed.”  The supposed reason being that the university wanted to protect the  income stream and kudos associated with these high-profile characters. I’m betting it’s no coincidence that Mann fans Demelle and Littlemore worked up a sweat when they read my articles about their hero here, here and here.

When one of his Facebook cronies gave Mann a link to my last article Mann’s swift reply was: “This has been sent to the legal team at Cozen O’Connor.” But I’m in good company – last week Mann and his Big Oil lawyers were making similar SLAAP lawsuit threats against Mark Steyn and the National Review.

The back-story is that Michael Mann has been pursuing a vexatious libel claim in the British Columbia Supreme Court for more than a year against popular Canadian climatologist, Dr. Tim Ball. Ball had quipped that Mann – a prominent public figure advocating reductions in human emissions of carbon dioxide – belongs “in the state pen., not Penn. State.” Mann’s advocacy has influenced policymakers to seek draconian restrictions on western industries.

Ball’s analysis of Mann’s discredited “hockey-stick” graph (the universal icon for green climate activism) is highly critical of Mann’s unethical cherry picking of evidence and withholding of key metadata for his graph. Prominent statisticians have already proven that Mann’s methodology was flawed. But an objective analysis of his hidden metadata could establish beyond doubt whether such flaws were intentionally perpetrated as part of a criminal fraud.

In light of the Sandusky conviction hindsight is telling Mann his suing Ball in Vancouver was a huge miscalculation not least because Canadians have fallen out of the love with David Suzuki’s “green revolution.” While Americans are seeing the recent Freeh report affirming the existence of an insidious culture at Penn. State that predisposes the hierarchy to subvert evidence of criminality committed by apex employees. Since the report’s publication Mann is hearing his name spoken so often in the same breath as Sandusky’s that the perturbed professor is throwing hissyfits threatening more libel suits. An unmistakable stench of malfeasance is triggering calls for a fresh, independent investigation into this “Mann-made” global warming science. Like other analysts, I believe public policy considerations alone merit such a thorough probe.

North of the 49th Parallel DeSmog’s hapless hero is reeling as he sees his cozy climate coterie crumple under the stark glare of an objective legal light. The culture shock of being in that British Columbia courtroom is certainly proving a far cry from the darker recesses of Mann’s university safe haven. Ball’s compulsory disclosure demands for Mann to hand over his “dirty laundry” – the hidden metadata for his graph – won’t go away. The more Mann prevaricates the more suspicion grows that he and his university employers dishonestly secured the spoils of $2 million in U.S. federal research grants.

Thus the Demelle and Littlemore distraction story is a straw-clutching exercise to trumpet unfounded and refuted allegations that I made numerous misrepresentations over academic and professional credentials. The most serious of the slurs is that I falsely obtained monies masquerading as a licensed attorney – a criminal offense. However, the Law Society of British Columbia (LSBC) investigated the matter and found no proof of wrongdoing. Indeed, if the LSBC had found even a jot of evidence they are duty bound to inform the police. [1.]

Curiously, Andrew Skolnick, the source of the slurs against me, was fired from his employment as associate news editor of the Journal of the American Medical Association. Exposed as a liar and his career in tatters Skolnick now ekes out a living in New York as a pet photographer. Earlier this year his shenanigans culminated in the hasty take down of several discussion threads on the Climate Etc. website. Blog owner, Dr. Judith Curry, sagely removed offending sections of her blog when it was found they were infected with Skolnick’s libelous commentary. Then last week  the recalcitrant rascal was also banned from the Science Writers’ Forum of LinkedIn for posting similarly malicious and offensive slurs against other folk. Rumors are he’s banned from any further activities as a Wikipedia editor as well.

Hearsay Affidavits Not Admissible in Canada

But these are admirable traits among those connected with the David Suzuki-backed DeSmogblog website. The ineptitude and hypocrisy of Demelle and Littlemore is amusingly exposed by D&L’s poor grasp of the “facts.” The pair have already apologized to readers for having to amend their flawed article post-publication. So much for Dumber & Lamer’s jibe about me being “highly prone to error.” But then DeSmogblog doesn’t seem to care that it’s perceived as a joke and the unprincipled sock puppet for discredited extremists in the Canadian green movement.

But the DeSmogblog’s non-story comes at a moment when truth and transparency appear to be coming back into fashion among the political class – at least in Britain. The House of Commons Justice Committee is learning lessons from Climategate and has now published a post-legislative review favoring toughening up of freedom of information laws. Not good news for Mendacious Mike and his hockey-stickers!

Certainly, what’s been written about me is worthless and easily discredited in a legal context. Not just because of the flaws cited above but because – as per the rules of hearsay and “unclean hands” – those Skolnick affadavits are inadmissible under the Canada Evidence Act.

To reiterate previous public statements: I have called Skolnick out as a fraud and a liar but he hasn’t followed up on his threat to sue me for libel. Thus we can safely say Demelle and Littlemore’s article is mere grandstanding built on fluff to distract from the real issue at hand: Mann’s impending demise in the science trial of the century.

[1.] Pursuant to the LSBC investigation proof was submitted of my academic and professional qualifications.

The New York County Lawyers Association has formally notified Demelle (and Huffington Post who also ran the story) that what they have published is a misrepresentation. However, the defamatory story remains unaltered and no apology has been issued by Huffington Post or Demelle.

Frankly, this validates my belief that Demelle and Huffington Post are in the business of publishing their lies to serve a pro-green media agenda. This is to distract from the real story: the alleged criminal fraud of Michael Mann and his accomplices at Penn. State University.